Summary of the Report by Prince + Pearce into The Future Resilience 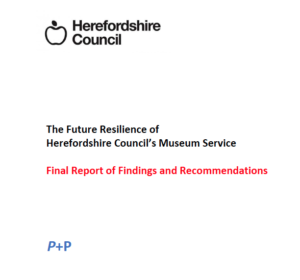 Herefordshire Council and Herefordshire Museum Service Support Group (HMSSG), in partnership, have received funding from the Heritage Lottery Resilience Fund for a study to identify a sustainable, deliverable governance and business model for Herefordshire’s Museum Service. Consultants Prince + Pearce (P+P) were then appointed in September 2017 to conduct this review. Their report has now been delivered and can be seen at: HC website and HMSSG website links.

P+P brought with them extensive experience of developing strategic programmes for cultural organisations in contexts as mixed as the Balkans, Kuwait and Lancaster. They began with a wide-ranging survey of the cultural landscape in Herefordshire, and were aware of the variety of ideas, possibilities and concerns. They conducted a robust assessment of the Museums Service’s history, current position and potential, recognising the investment the Council has made to improve revenue, and the support offered by HMSSG.

The report recognises the limited capacity of the Museum Service as it now stands, given the pressures on Herefordshire Council to maintain statutory services and the hard choices imposed by economic circumstances. P+P have identified, however, a cohort of potential partners who could contribute to a sustainable Museum Service either through expertise or financial support, over an immediate or longer term basis. These are identified as, but not limited to:

A two- stage process is recommended. The immediate aim is to expand the capacity of the Service through increased staffing levels, re-branding and greater access to the collections themselves, so energising the service, reversing shrinkage and allowing a return on the Council’s previous investment. P+P recommend that as a first stage relationships be explored with partners or a network of partners, who could between them provide the financial, administrative, governance, digital and venue capacity required, and who have the capacity to respond quickly.

The report recognises that decisions as to these partnerships must be made through due process, and potentially could be informed by the soft market testing undertaken recently by Herefordshire Council. This early establishment of a short to medium-term framework sufficiently robust to sustain the Museum Service would be on a community interest or charitable trust basis, and central to the plan would be easy public access to the collections.

Once this host framework was established, partners, and further potential partners, could take time to identify a route into a second-stage long term structure into which to transfer the collections and delivery of the Service. Although it is too early to make decisions on final solutions, P+P clearly see potential in the future development of NMiTE, the new university, whose various sites and resources could both enhance, and be enhanced by, such a rich cultural relationship.

P+P have been aware of ideas being developed alongside their own work, particularly for buildings such as the Museum & Art Gallery in Broad Street. Their brief, however, has been to find a sustainable solution for the collections and the Service, rather than any particular building which might form a part of the Service. The report is careful to make clear that their proposals neither exclude or include any potential development of any buildings, but they do provide a firm foundation from which to look for future funding and capital development projects.

Next steps towards transfer to the first stage hosts for the Museum Service might be informed by the recent soft market testing of potential for all three Council cultural services – Libraries, Archives, Museum, but whether or not the outcome of that process eventually led to closer delivery of those three services should not distract from the trajectory and focus of this viable and sustainable solution for the Museum Service.

We use cookies on our website to give you the most relevant experience by remembering your preferences and repeat visits. By clicking “Accept All”, you consent to the use of ALL the cookies. However, you may visit "Cookie Settings" to provide a controlled consent. You can read our full privacy policy here: Read More
Cookie SettingsAccept All
Manage consent

This website uses cookies to improve your experience while you navigate through the website. Out of these, the cookies that are categorized as necessary are stored on your browser as they are essential for the working of basic functionalities of the website. We also use third-party cookies that help us analyze and understand how you use this website. These cookies will be stored in your browser only with your consent. You also have the option to opt-out of these cookies. But opting out of some of these cookies may affect your browsing experience.
Necessary Always Enabled
Necessary cookies are absolutely essential for the website to function properly. These cookies ensure basic functionalities and security features of the website, anonymously.
Functional
Functional cookies help to perform certain functionalities like sharing the content of the website on social media platforms, collect feedbacks, and other third-party features.
Performance
Performance cookies are used to understand and analyze the key performance indexes of the website which helps in delivering a better user experience for the visitors.
Analytics
Analytical cookies are used to understand how visitors interact with the website. These cookies help provide information on metrics the number of visitors, bounce rate, traffic source, etc.
Advertisement
Advertisement cookies are used to provide visitors with relevant ads and marketing campaigns. These cookies track visitors across websites and collect information to provide customized ads.
Others
Other uncategorized cookies are those that are being analyzed and have not been classified into a category as yet.
SAVE & ACCEPT